Instead of meeting with Aboriginal youth who had traveled 1,600 kilometres by foot in -50°C frigid winter temperatures to Parliament Hill, Prime Minister Harper went to an airport photo-op with two pandas. 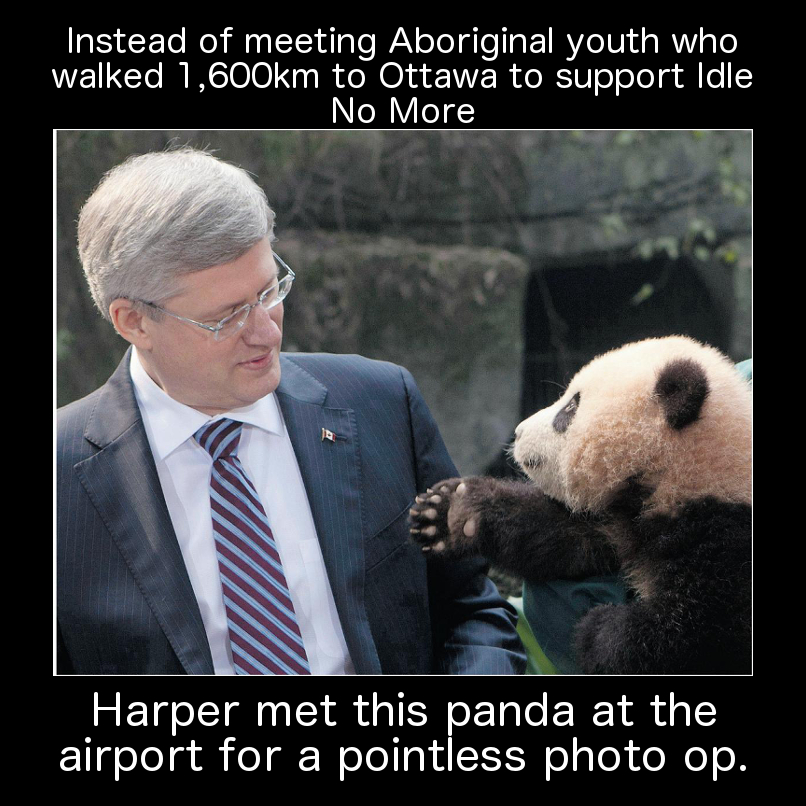 Inspired by the Idle No More movement, 17-year-old David Kawapit Jr. and six friends left their traditional territory to travel for two months through brush, snow and frigid winter temperatures - walking from northern Quebec to Ottawa to call attention to local issues facing youth, including suicide, and fight for the future of Aboriginal people in Canada.

And instead of meeting with the walkers, Prime Minister Harper chose to leave town for a photo-op with two pandas. He’s spending $10 million to rent the pandas. Seriously. $10 million for panda priorities. 1 It’s outrageous to spend $10 million on pandas while Aboriginal children and youth receive $2-3,000 less education funding each year than non-native children and youth -- and need to walk 1,600km just to be heard by our government. 2,3

Canada’s Aboriginal youth face many hurdles -- and this panda PR shows you the problem with this government’s priorities.

Young people shouldn’t have to walk 1,600km to get our government’s attention.

Equal education funding is a good start, and we need to think big-picture. Time and again, Canada has broken its treaty promises to First Nations. That’s why Canada and many Canadians have gotten rich off the land’s resources, while First Nations have been locked into structural poverty. 4,5

This is a moment to make sure Canadians know what’s going on, make our voices heard, and keep our promises. Please sign this urgent petition now and share it with your friends and networks.

Here’s quote from our friend Heather Milton Lightening, Cree advocate and organizer, who offered this statement of support:

"Our people have more power than we know and understand. Harper is someone who understands power. This is a game of wills, and his acknowledgment of pandas over the Nishiyuu youth is intended to show that our people are powerless in the eyes of his regime. Little does he know leaders come and go but our people are forever. These youth showed the world the power of our people. Now it’s time to act."

Proud Cree & Dene Woman from Saddle Lake Cree Nation of Treaty # 6 Territory on Turtle Island. A Daughter, Mother, Grandmother, and Teacher who knows her responsibility as a nehiyawiskwew.